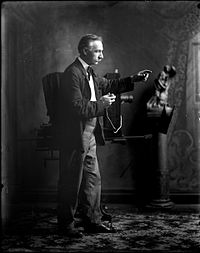 Oscar Grossheim lived and worked in Muscatine nearly all his life. His many years of civic service show his dedication to the community. He could not have given a greater gift to the citizens of Muscatine than the treasure of the fruits of his profession.

Grossheim was born in 1862, the son of Theodore and Bertha Kirschbein Grossheim of Muscatine. He died in 1954 at the age of 92. Mr. Grossheim also served on the Muscatine School Board, was President of the Muscatine Civic Society, Commodore of the Muscatine Launch Club, member of the Knights of Pythias and Elks Lodge #304.

Grossheim’s career as a photographer began when he was only 15 years old. At that time he was making and delivering his own photographs while working as an apprentice at a local studio. Three years later he had his own studio and in 1898 had prospered sufficiently to erect his own building. Some of his innovative talent is shown in his development of a portable camera in the early 1880’s. This camera and Grossheim himself would later capture the interest of George Eastman (of Eastman-Kodak) who was working to perfect his own portable camera in 1890.

During his career, Grossheim was a member of the Photographers’ Association of America, and his portraits were often selected for the organization’s Traveling Loan Collections. In addition, he received many awards for photographic excellence in national competitions.

The word “treasure” may be used to designate something of great value, perhaps a thing containing artifacts of a past way of life, and maybe an object hidden away for a long time. Considered in this way, Oscar Grossheim and his photographic work are certainly one of the great historical treasures of Muscatine.

Grossheim’s subjects were most often the people, places and events that together created the life of a growing community. Today the collected work of Oscar Grossheim is an invaluable piece of Muscatine’s heritage. They are themselves the artifacts of a people, a world, and a way of life.

Tens of thousands of glass negatives of Grossheim’s work have been saved to tell their stories to future generations. Unlike some treasures, these negatives were never really hidden away from the people of Muscatine. However, for many years they did sit quietly and unnoticed in the attic storage of a downtown building. In 1982, Mike Bendle of Muscatine donated the collection to the Musser Public Library where many prints from the negatives may be seen today.