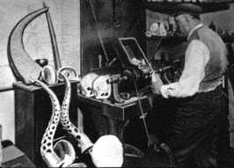 A German immigrant button-maker, John F. Boepple founded an industry that turned the small town of Muscatine, Iowa, into the "Pearl Button Capital of the World."At its peak, the pearl button industry employed half of the workforce in the Muscatine area, where 1.5 billion buttons–nearly 37 percent of the world's buttons—were produced annually.

Boepple was born in Ottensen, Germany (near Hamburg), where he learned the family trade, making buttons from horn, ocean shell, and other materials. When a change in tariffs put him out of business in Germany, Boepple, remembering a box of mussel shells his father had received years earlier from the United States, journeyed there in 1887 to search for the mussel shells that made desirable buttons. His only clue was that the shell had been harvested from a river 200 miles west of Chicago. He began in Illinois on the Sangamon River, where, according to popular legend, Boepple discovered the sought-after shell while bathing in the river. The shell, however, was too fragile to withstand cutting. Boepple continued westward to Rock Island, Illinois, then to Columbus Junction, Iowa, and finally in 1891 set up a button shop with financial partner William Molis near Muscatine's plentiful mussel beds.

By the time Boepple established his first shop, the McKinley tariff of 1890 had made imported ocean shell for buttons expensive. Conditions were ideal for what many in Muscatine originally considered the foolish dream of a strange man speaking poor English. By 1894 Boepple had expanded into a two-story building designed especially for manufacturing pearl buttons. The industry appeared more viable as Boepple's new factory made the transition from foot-powered lathes to machines connected to a steam engine by line shafts. With a promising future for the freshwater pearl button industry, entrepreneurs took an interest in button cutting and mussel fishing, commonly called "clamming."In 1897 more than 300 clammers reportedly worked the Mississippi River between Burlington and Clinton. Only six years after Boepple started the industry, 53 button-cutting shops were operating in Muscatine, using more than 3,500 tons of shell taken from the Mississippi.

As the first warnings of overharvesting appeared in 1897, Boepple, who was considered the authority on pearl button manufacturing in the United States at the time, gave the industry a boost when he spoke to the congressional Ways and Means Committee and President McKinley about the necessity of a new import tax as part of the Dingley Bill. With the Dingley Bill protecting American pearl button interests, additional factories sprang up along the Mississippi River from St. Paul to New Orleans.

Boepple had strained relationships with his financial partners and suspected that others wanted to steal his specialized knowledge. He ordered unnecessary equipment and chemicals to confuse potential competitors. He remained attached to his ideals as an Old World craftsman, opposed automation, and struggled with English. Despite his many contributions to the industry he founded, his poor business skills prevented him from prospering.

Boepple's business partners eventually convinced him to open a button factory in Davenport, which ultimately brought about his ousting from the Muscatine plant. His partners continued to operate the Muscatine plant under the name Pioneer Pearl Button Company. Disillusioned by his partners' tactics, Boepple became a shell buyer for other button companies.

In 1910 Boepple took a position at the newly established Fairport Biological Station, founded by the U.S. Congress in 1908 to study the propagation of mussels. Among his contributions was the improvement of the crowfoot hook–the most popular but somewhat destructive method for harvesting mussels. Boepple claimed that his design prevented mussels from falling off the hook, leaving behind injured mussels, and caught only large mussels, allowing undersized shells to continue to grow. His duties included acquiring mussels and documenting the size and makeup of mussel beds. While working a river in Indiana during the fall of 1911, Boepple reportedly stepped on a shell, cutting his foot and causing a blood infection. Hospitalized in Muscatine, he died on January 30, 1912.

Although Boepple died with few assets, the people of Muscatine credited him with establishing an industry that brought wealth and employment to many. Muscatine's mayor issued a proclamation asking all businesses to close for one hour during Boepple's funeral. During the 1914 official dedication of the Fairport Biological Station, a commemorative plaque was installed as a tribute to the man who forever connected the name Muscatine with buttons.